My 2nd visit to Dales School in Blyth today, hoping to see their Pacer train arrive. I was too late. Both coaches were already in the school playground, but I was able to watch in fascinatioin as the coaches were slowky winched off the lorries onto temporary track, then moved sideways on sliders onto the permanent track that the school has already had built. A marvellous feat of engineering. The team at dales have got some great things planned for their train, familiarising the students on how to use public transport, safety near a railway line, and one coach is to be a railway. I felt privaledged to have been invited to watch the procedings. 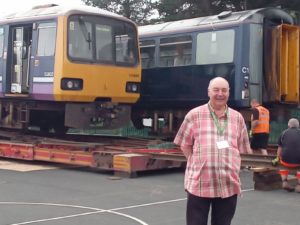