We expect our next Public Meeting to be around September 2022 and details will be displayed here once the date, venue and speaker are confirmed.

Too Hot To Travel – But A Better Explanation as to Why

Despite the advice not to travel, I made it to Durham ok for my work conference, easily making my 5…

Overwhelmed to get a text today advising me that at Railfuture’s AGM in Bristol, the winners of Railfuture’s Rail User…

The scheme now being progressed by the local authority (Northumberland County Council) will be for a passenger railway from Newcastle to Ashington, including intermediate stations at Northumberland Park (Metro Connection), Seaton Delaval, Newsham for Blyth, Bebside (may be called "Blyth Bebside") and Bedlington, along with dualling part of the single-track section to permit a 30-minute service frequency.

SENRUG is delighted that an earlier plan to phase the re-opening and omit the stations at Seaton Delaval and Bebside initially has been dropped. However the line will not run beyond Ashington to start with - so Woodhorn will not be served, neither will it include a station at Seghill. The Council are open to further extensions to Woodhorn and Newbiggin-By-The-Sea once the core route is up and running, but do not see the case for a station at Seghill. SENRUG disputes this (for reasons please see The Case For A Station at Seghill), but has agreed to wait until the line is actually opened and then ask the Council to revisit this. 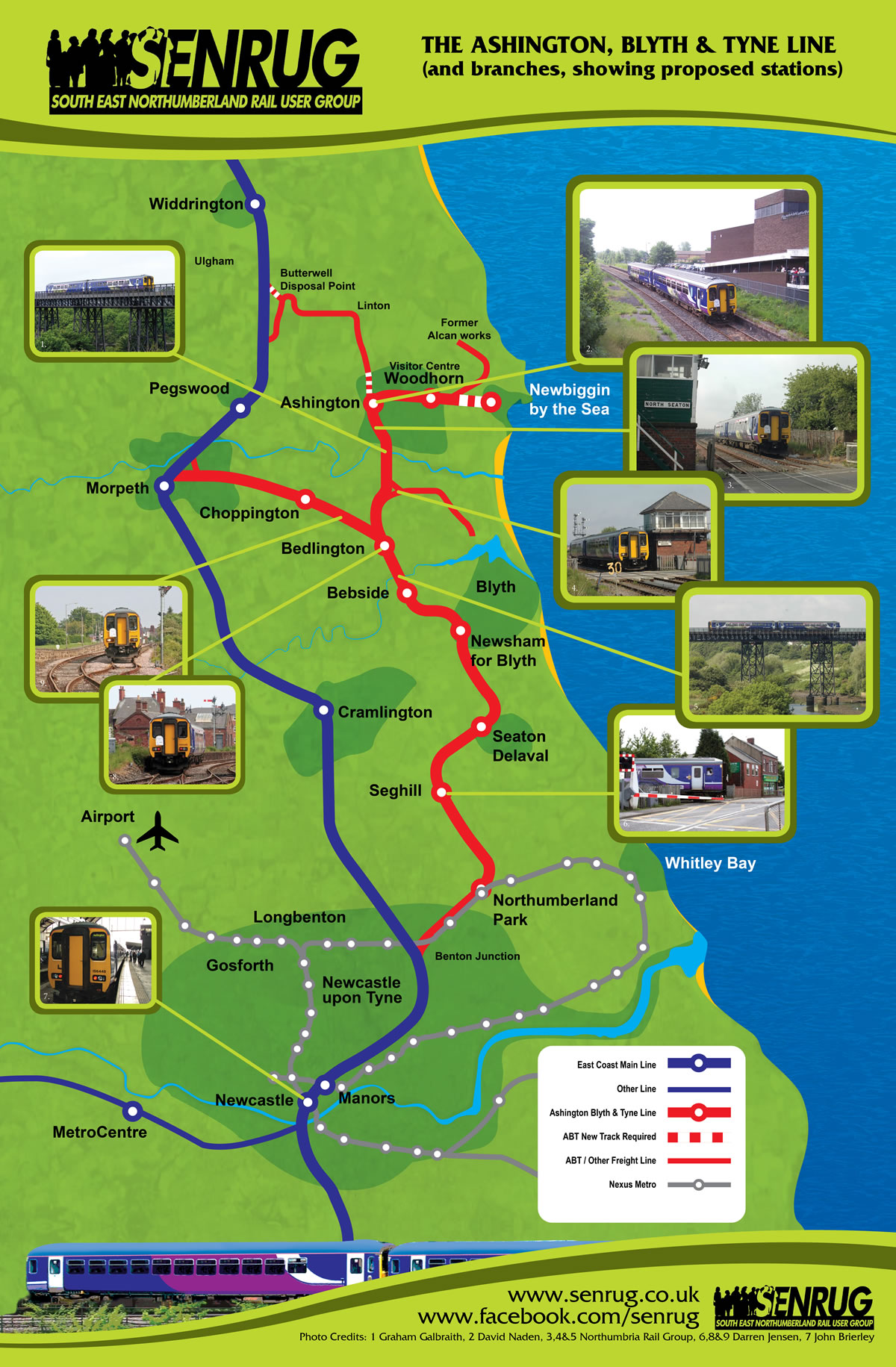 In May 2020, Northumberland County Council, the sponsoring authority, awarded contracts for the Outline Design of the scheme to SLC Rail and AECOM. Although Government Ministers continue to express full commitment to the scheme, funding is not yet in place and the Council are working on applications to the DfT’s Beeching Reversal Fund and RNEP (Rail Network Enhancement Pipeline) Funding.

The Outline Design work will obviously take longer than originally envisaged due to the need for the consultants’ staff to adhere to social distancing measures resulting from the COVID-19 crisis, but the Council continue to say an overall project delivery date of late 2023 is possible for the first phase, or slightly after that if the initial re-opening is now delivered as a single phase.

A full summary of the main events, both positive and setbacks, from when SENRUG started its campaign in 2005 to the present day can be seen here.

Pivotal moments in the campaign history were the 2008 SENRUG Charter Train round the line and the 2014 SENRUG Schools DVD Competition (to mark the 50th anniversary of the original withdrawal of passenger services in 1964).

- Further extension from Ashington to Woodhorn and Newbiggen-by-the-Sea (requires a very short section of new track on existing alignment beyond Woodhorn to Newbiggen)
- Extension of Newcastle – Morpeth trains to Bedlington, with a new intermediate station at Choppington
- New station at Seghill (see The Case for Seghill)
- New link between Blyth Town Centre and Newsham (the old alignment is compromised slightly by Blyth Sports Centre and the new route would need to skirt round it)
- Utilisation of privately owned freight route from Ashington to Butterwell Junction to form relief freight route and diversionary passenger route on the East Coast Mail Line between Benton and Butterwell Junctions, and potential passenger service between Ashington and Alnmouth (requires new north to east junction at Butterwell)


Back to Our Campaigns

We expect our next Public Meeting to be around September 2022 and details will be displayed here once the date, venue and speaker are confirmed.

Too Hot To Travel – But A Better Explanation as to Why

Despite the advice not to travel, I made it to Durham ok for my work conference, easily making my 5…

Overwhelmed to get a text today advising me that at Railfuture’s AGM in Bristol, the winners of Railfuture’s Rail User…