We’ve had to suspend our regular public meeting programme due to the COVID-19 crisis, but will be starting again as soon as it is safe to do so. Meanwhile, our website is being updated with information on our various campaigns and more.

.Just when you thought it was safe to get back in the water (ie travel abroad), quarantine has been re-introduced…

For some weeks now, SENRUG has been concerned that the government, perhaps unintentionally, has been pushing the “don’t use the…

A detailed chronology of SENRUG’s campaign to re-introduce passenger trains on the Ashington Blyth & Tyne freight route is below For brevity, some events have been merged together and some dates are approximate..

Early Day Motion signed by all the region’s MPs

SENRUG organised charter train to Ashington. The train made 3 return trips during the day. Tickets on the 2nd and 3rd trip were sold to members of the public, but the first trip was reserved for invited stakeholders only including MP, MEP, Councillors and officers from various local authorities, Business Leaders, TUC and the Press. There were just under 160 special guests on the stakeholder trip, and the event was covered on the radio and TV local news and TV The Politics Show 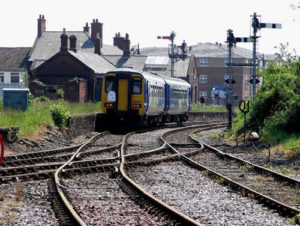 Secretary of State Geoff Hoon visits the scheme. SENRUG Chair Dennis Fancett presents the scheme to him again at Woodhorn. 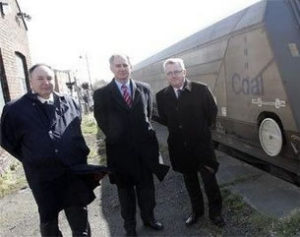 ATOC (The Association of Train Operating Companies) includes scheme in its “Connecting Communities” Report. Now there is support from within the rail industry.

SENRUG hosts “hustings” meetings with parliamentary candidates for Wansbeck for the forthcoming general election. All support the scheme

DfT advise NCC to proceed with GRIP 3 study from Network Rail as quickly as possible.

NCC advise SENRUG they will be proceeding to GRIP 3 after completion of preparatory work.

NCC announce formal study into re-opening the line. NCC tell SENRUG Network Rail are now unable to carry out the GRIP Stages 1-3 concurrently so this will be a GRIP 1 Study initially, but it will be fast-tracked.

NCC say GRIP 1 Study now received from Network Rail and they have a programme of work to move forward.

SENRUG announce a Schools Competition for local schools to produce a DVD setting out the business case for re-opening the line. 5 local schools will participate. The winning entry will be presented to the schools’ MP at parliament to commemorate the 50th anniversary of the line’s closure in November 1964. For more details go to http://www.senrug.co.uk/2014SchoolsCompetition

Northumberland County Council announces they have set aside £20m for the scheme. This will cover the cost of the GRIP 2 & 3 study from Network Rail, the GRIP 4 study after that, and include a significant contribution towards the final re-opening costs.

Following announcement of the winners of the Schools DVD competition in September 14, SENRUG Chair Dennis Fancett takes the winning team from Hirst Park Middle School in Ashington to London to present their DVD to Ian Lavery MP for Wansbeck. Mr Lavery says the DVD is of excellent quality and re-iterates his full support for the re-opening. For more details and to see the winning entries go to http://www.senrug.co.uk/2014SchoolsCompetition

Northumberland County Council announce they are proceeding with the GRIP 2 Study from Network Rail and that it is scheduled for completion by June or July 2016.

Northumberland County Council ask SENRUG to provide a letter of support for their bid for funding to proceed on to the Network Rail GRIP 3 Study – and SENRUG readily agrees.

Northumberland County Council receive GRIP 2 report back from Network Rail – but without some key financial data that is to follow.

North East Combined Authority publishes “ METROFUTURES – The combined future of Metro and local rail in the North East”. This document shows that a local rail route will be established to Ashington via the existing heavy rail freight route as per the SENRUG campaign (and not via the longer Metro route between Newcastle and Northumberland Park). However the document is widely mis-reported in both local TV and press as a proposed Metro extension to Ashington. Correspondence between Chair of SENRUG and Director of Rail at NECA confirms the plan remains exactly as the SENRUG campaign, although greater integration of heavy rail and metro, with a physical connection between the 2 systems at Northumberland Park is envisaged.

Northumberland County Council receive full GRIP 2 Report from Network Rail, and seek internal approval to proceed to GRIP 3. GRIP 2 estimates re-opening costs at £191m, but this includes a 40% contingency for things like signalling upgrades which must be done whether passenger services are re-introduced or not. Excluding these, SENRUG estimates the true cost for re-introducing passenger trains is nearer to the £50m it has consistently estimated. The Council indicate they hope to commissioning the GRIP 3 by December 2016, the GRIP 4 by October 2018, start construction by February 2019 with trains running by 2021! SENRUG applauds this positive schedule but notes the GRIP 1 and 2 reports both took longer to commission and longer to complete than scheduled, and trusts further delays will be eliminated as the project gains momentum.

Northumberland County Council announce they are proceeding with the GRIP 3 Study from Network Rail. This means staff are authorised to negotiate terms and price with Network Rail, not that a contract has been signed for Network Rail to do the work

The Chief Economist to the Bank of England visits Ashington, and blogs his hunch is the benefits of re-opening the railway would be “whopper”. See his blog here.

GRIP 2B completed by Network Rail but does not offer anticipated cost savings. NCC say they are still committed to progressing

Northumberland County Council, in conjunction with Northern, organise a special train to run round the line as far as Newsham. Secretary of State for Transport Chris Grayling was on board along senior managers from Northern, Network Rail, Transport for the North and Nexus, and of course TV crews. SENRUG Chair Dennis Fancett was also invited to attend. A few days later the County Council signed off a funding package of £3.5m for the next phase including the “Develop” stage of Network Rail’s “Rail Network Enhancements Pipeline” (which includes work equivalent to the GRIP 3), further scoping work and preparation of a funding bid from the DfT’s “Transforming Cities” Fund. These 3 work packages all started later in the month. 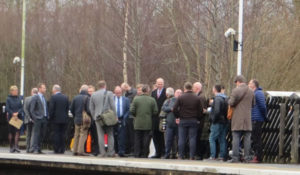 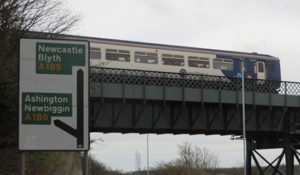 IPPR North (Institute of Public Policy research – the influential Think Tank) published a Report listing the Ashington Blyth & Tyne Re-opening as one of the top 6 “quick wins” for transport priorities across the whole of the North of England. SENRUG Chair Dennis Fancett was invited to the launch of their Report in Leeds on March 18th. See https://www.ippr.org/research/publications/quick-wins-for-the-north-s-transport-network

The TaxPayers Alliance rank the scheme 4th in their Great British Transport Competition, as one of the transport projects that money could be spent on if HS2 were cancelled

A confusing report in The Evening Chronicle said The Secretary of State for Transport wishes to give the Ashington Line to Nexus and is waiting for a proposal from them to take over the track and start running services. Both Northumberland County Council and Nexus confirmed they do not see the route as forming part of the Metro network. SENRUG doesn’t mind who owns the tracks or runs the trains but the key point is the route between Northumberland Park and Central station must, in our opinion, be via the direct Network Rail route via Benton Junction, and not via the much longer Metro route with its additional 10 stops. Otherwise the train journey time won’t beat the bus, and the business case will collapse. Additionally the new Metro rolling stock will not have diesel capability and their battery power will not be sufficient to reach Ashington.

The North East Joint Transport Committee (NEJTC) submit a funding application to the DfT’s “Transforming Cities” fund. The application is for a number of schemes across the North East including phase 1 of the Ashington Blyth & Tyne Re-opening. A decision is expected in March 2020, with Northumberland County Council saying trains could be running by late 2022 (although, allowing for issues such as driver training, SENRUG has been told the May 2023 timetable change is a more realistic expectation).

Two government ministers visit the scheme. First, on Monday 6th January, came Secretary of State for Transport Grant Shapps, and then later, on 28th January, Minister of State Chris Heaton-Harris arrived, announcing £1.5m towards the re-opening, on the same day that a £500m “Beeching Reversal” fund was also announced. There was initial confusion amongst campaigners about the £1.5m as SENRUG feared it meant yet another study was required, or that a new funding application needed to be made to the Beeching Reversal Fund. Subsequent clarification from the County Council confirmed neither is the case. The £1.5m is to contribute to work already underway; the application to the “Transforming Cities” fund submitted the previous November still stands, with the decision still expected by March 2020. The Beeching Reversal Fund is for new schemes, although could possibly be appropriate for phase 2 of the re-opening, which the Council again confirmed they are progressing as quickly as possible.

Prime Minister Boris Johnson, in the prelude to his statement confirming HS2 will go ahead, confirmed that the final decision on the Ashington re-opening (and a number of other transport projects) will be made by The Chancellor in March. This accords with the timescale for the decision on the Transforming Cities Fund Application as previously advised to SENRUG. Meanwhile, Council Leader Peter Jackson confirmed that the Council are now looking to see whether further government funding can be accessed to permit Seaton Delaval and Bebside stations, originally omitted from Phase 1, to now be included in the initial opening – a move that SENRUG strongly supports.

The March 2020 Budget and Transforming City Fund awards do not include funding for the Ashington Re-opening. Urgent enquiries to pursue how this will then be funded given the Prime Minister’s earlier statement of commitment to the project are overtaken by the Corona Virus crisis, which itself raises a question mark as to whether even those schemes that were announced will be able to go ahead, once the nation’s financial situation is re-assessed after the virus emergency.

Northumberland County Council award the contract for Outline Design of the scheme to SLC Rail and AECOM working together. This work equates to the Design phase of RNEP (Rail Network Enhancement Pipeline) and is broadly equivalent to the GRIP 4 (Single Option Development) stage of Network Rail’s GRIP (Governance for Rail Investment Projects) Process. As the Transforming Cities Funding Bid was unsuccessful, NCC are now re-evaluating whether the initial re-opening plan can be delivered as a single phase instead of the two-phase approach required by Transforming Cities, and are developing funding applications for the DfT Beeching Reversal Fund and RNEP Funding. Government Ministers continue to express commitment to the scheme, including an article by Baroness Vere (Under Secretary of State at the DfT) in The Journal (5th May 2021), and the Council continue to indicate an overall delivery schedule of late 2023 is possible for Phase 1, or slightly after that if indeed it does prove possible to deliver the scheme as a single phase.

Back to Re-open Ashington Blyth & Tyne

We’ve had to suspend our regular public meeting programme due to the COVID-19 crisis, but will be starting again as soon as it is safe to do so. Meanwhile, our website is being updated with information on our various campaigns and more.

.Just when you thought it was safe to get back in the water (ie travel abroad), quarantine has been re-introduced…

For some weeks now, SENRUG has been concerned that the government, perhaps unintentionally, has been pushing the “don’t use the…