What a bizarre announcement on Morpeth’s CIS today. “Obfuscated Train”? A train that will disappear en route? May not really be there? Does anyone have any idea as to what this announcement means? I asked both Northern, responsible for the CIS, and LUMO, whose train it is, but neither could enlighten me. Certainly passengers waiting on the platform were baffled. and rightly so. And just to deepen the mystery, this train does not stop at either York or Doncaster, but is fast from Newcastle to London – for anyone brave enough to get on it! 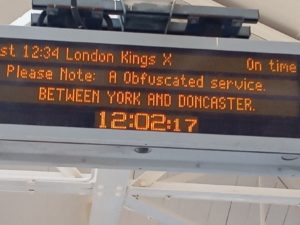