SENRUG believes the entire station at Cramlington should be moved 200 metres to the south, adjacent to the pedestrian subway under the A1171 Westmoreland Way to Manor Walks Shopping Centre, making use of the existing pedestrian footbridge with ramp access over the railway at this point which links the Shopping Centre to the Beaconhill housing area to the west of the railway line.

The land between the railway line and the A1171 Westmoreland Way should then be used to provide an integrated bus station for Cramlington, which would connected to Manor Walks Shopping Centre via the pedestrian subway, and adjacent to and integrated with the railway station. The new bus station would replace the series of bus stops in Dudley Lane to the East of Manor Walks. In addition, there would be space to create an expanded, dedicated car park for rail users.

The new station site adjacent to the bus station is also likely to justify commercial provision of station facilities such as taxi office, retail and catering outlets and bank machine. 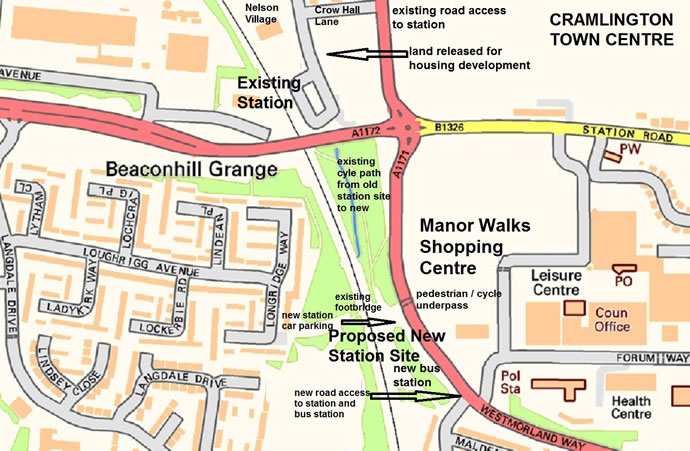 The existing station location at the entrance to Nelson Village pre-dates the vast growth of Cramlington to the town it is today with population of 40,000. The station is not central for the town, has no busses serving it and car access is difficult through the narrow Crow Hall Lane, and there is very limited parking.

The new station location would complement SENRUG’s campaign to increase train service frequency at Cramlington to 2 trains each way per hour with the possibility of some services providing a direct connection to cities such as York, Leeds and Manchester. By increasing the number of people likely to use the station, it becomes a more viable commercial proposition for train companies to want their services to call at the station.

For rail passengers: a station with bus connections, car parking, and simple pedestrian access to the Shopping Centre

For those needing to park at the station: an extended car park site with easy access from the A1171.

For shoppers: Easier access to and from the shops from buses and trains.

For residents of Nelson Village: Easy access to the station will still be provided by the existing footpath and cycle route under the A1172 which links the current station site to the proposed new site. Commuter parking and road congestion in Nelson Village would be eliminated as road traffic to the station would no longer use Crow Hall Lane

For Cramlington as a whole: An expanding town with better and fully integrated public transport facilities will attract yet more shops and businesses increasing the town’s overall prosperity and the range of local services available.

The first step should be to commission a consultancy report from a competent authority which should verify likely costs for the new station and associated infrastructure, and compare this with the value of the land released for development and the overall economic benefit to the town.

After this, Northumberland County Council should proceed through the Network Rail GRIP process and once the costs are confirmed and go-ahead agreed, manage the non-rail aspects of the scheme. SENRUG estimates the costs payable to Network Rail for construction of 2 new platforms - one each side of the line - which is electrified thus requiring the moving of some of the overhead gantries, would be around £10m. The cost of creating the bus station and new car park would cost extra, and would not be under Network Rail control.

Against this, the land at the existing station site could be released for residential development and could possibly achieve around £1.5m. Further contributions might be obtainable from the developer building the new homes adjacent to the west of the new station site, from Manor Walks and from the bus companies. National funding is also available for new station developments.

In Summer 2016, Northumberland County Council indicated they would own and lead on the plan to relocate the station, along with the sister campaign to increase service frequencies at Cramlington to every half hour. They held a Workshop in Cramlington in September 2016 with Northern and TPE (train companies), SENRUG, Cramlington Development Trust and Cramlington Town Council. It is expected they will now commission an initial feasibility study to cost the scheme and establish the benefits.

Sadly, based on indicative costings feedback from Network Rail, Northumberland County Council has decided not to progress moving the station at present. SENRUG nevertheless believes it is a realistic objective and will continuing lobbying as opportunity permits. SENRUG remains committed to improving train service frequency at the station even though this is more difficult as the site is not so appealing to train operators due to its out of town and inaccessible location. For more on improving train frequency at Cramlington please visit our campaign page on the Newcastle - Morpeth local service here.