SENRUG proposes a new station should be built at Killingworth on the East Coast Mail Line at the point where the line passes under the A1056 Killingworth Way. The new station would be served by the local train services running between MetroCentre / Newcastle and Morpeth / Chathill, currently an hourly service but with evening and Sunday service due to be added with the new franchise, starting in 2016.

The station would require new platforms either side of the double tracks and there is sufficient room for the platforms within the existing cutting. However the station would not require a footbridge because of the existing road overbridge which has wide pavement and would allow ramps from the south side of the road to each of the northbound and southbound platforms. The station would be unstaffed, similar to Cramlington and Manors. Ticket machines would be situated on the platforms. At street level there would be National Rail signage and notices indicating which platform is for which direction.

There is ample space for a car park to the west of the line alongside the northbound platform in land that previously contained the coal sidings. This car park could be accessed from the roundabout at the junction of the A189 Spine Road and A1056 (this roundabout will also be the access point to the new housing development). Additional parking provision could be created to the east of the line alongside the southbound platform on what appears to be redundant industrial land, possibly owned by an adjacent factory 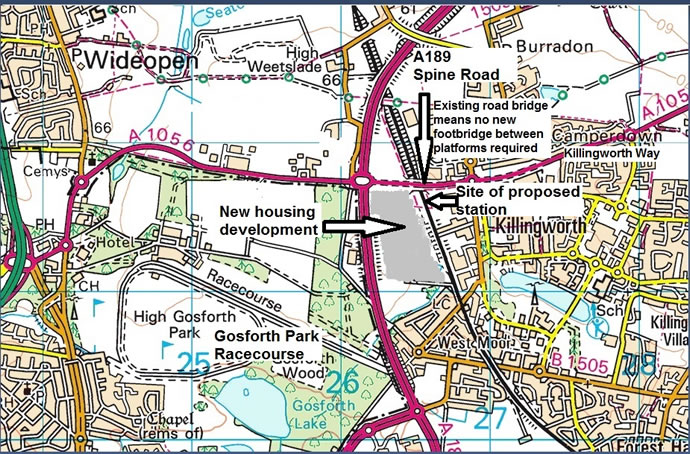 The new station would serve the existing community of Killingworth less han a quarter of a mile to the east and a major new housing development on the west side of the station site. The current population of Killingworth, excluding the new housing development is 49,000 (2006 figures) yet the nearest Metro station at Palmersville is 2.6 miles or a 50 minute walk from the proposed Killingworth station site. From Palmersville, it is an 18 minute journey to Central Newcastle. This would be reduced to 8 minutes on the heavy rail service from the new station at Killingworth to Newcastle.

Additionally, the location of the proposed station, just off the A189 Spine Road and almost at the southern extremity of the dual-carriage way section of this trunk route into Northumberland would make the station an obvious Park & Ride location keeping road traffic out of central Newcastle.

Finally, the station site is extremely close to Gosforth Park Race Course and would provide public transport access to Gosforth Park both from Newcastle to the south and Northumberland to the north. It should be noted that the new rail franchise commencing in 2016 requires the new operator to provide a Sunday service

In railway terms, the station lies on a 10 mile stretch between Newcastle and Manors (6.5 miles to the south) and Cramlington (3.5 miles to the north). As the local service on this route is essentially a commuter railway, it seems absurd not to have an intermediate stop between Manors and Cramlington when the line passes alongside a community with the population size of Killingworth. The new station would increase the number of passengers using the line, strengthening the case for greater investment and increased service levels.

For local trains, an additional stop at Killingworth would add about 2 minutes to the overall journey time between Newcastle and Morpeth which SENRUG believes are within acceptable limits. However, noting the line is fully electrified, if electric stock is introduced in future with higher top speed of 100 miles per hour, savings on overall journey times of at least this amount would be achieved, cancelling out the penalty introduced by a station at Killingworth.

SENRUG estimates the new station would cost about £10m; this being for 2 new platforms alongside electrified tracks which also carry high speed inter-city services. No new footbridge between the platforms would be required, but each platform would require ramp access from the road overbridge.

SENRUG believes the project should be led by North Tyneside District Council who should establish a steering committee including Network Rail, the new Northern Rail franchise operator, the housing developer and SENRUG.

The first stage would be to commission a feasibility report which would seek to confirm likely number of passengers who would use rail services at the station, increased fare revenue gained by the train operator, and capital costs for the station construction from Network Rail. The Council should then seek to access Department For Transport New Station funding as well as contributions from the housing developer as an adjacent station would result in a significant increase in property prices. North Tyneside Council should then manage Network Rail through their GRIP process [GRIP is an internal Network Rail acronym standing for “Governance in Rail Investment Projects”].

North Tyneside District Council have advised SENRUG they do not wish to pursue the option. With so many of SENRUG’s other campaigns moving forward, SENRUG has reluctantly decided to put this campaign on the back-burner, as chances of success without local authority support are limited. The opportunity for funding contributions from local housing developers is therefore lost, making the scheme more expensive to re-visit in future.