Re-introduction of passenger services on the fully operational and maintained freight line between Newcastle and Ashington, with intermediate stations at Northumberland Park (Metro Connection), Seghill, Seaton Delaval, Newsham for Blyth, Bebside and Bedlington.

Beyond Ashington, the working freight line continues and passes alongside the Woodhorn Museum of Mining and Northumberland Life, a major tourist attraction in the region. A station adjacent to the museum would serve as a Park & Ride facility for commuters from the outlying villages of Newbiggin by the Sea, Linton, Lynemouth and Ellington, as well as creating an off-peak demand for visitors to the Museum.

Blyth would be served by stations at Newsham, on the outskirts of the town, and the station at Bebside. 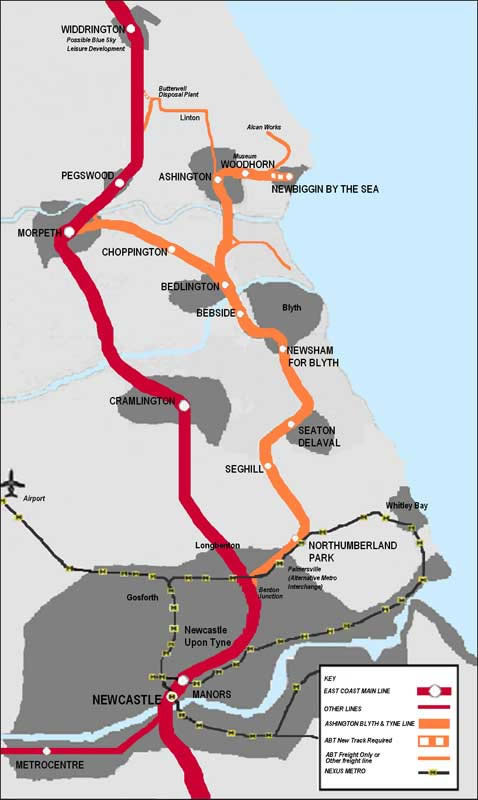 SENRUG started campaigning for the re-opening of this line in 2004. Our understanding has always been that for the campaign to succeed, we need to have the sponsoring local authority (Northumberland County Council) fully on board and driving the scheme forward through the statutory channels.

Campaigning has been hard work, with a number of ups and downs, and the following chronology sets out the dates for key events – both positive and less so. For brevity, some events have been merged together and some dates are approximate.

Once the core link is re-opened, that will not be the end of the campaign. The route has lots of further potential and SENRUG will continue to campaign for the following:

- Creation of stations at both Seaton Delaval and Seghill if they are not included in the core re-opening scheme.

- Introduction of a service between Morpeth and Bedlington with an intermediate station at Choppington. This can be achieved by extending the MetroCentre to Morpeth local services on to Choppington and Bedlington.

- A link between Blyth Town Centre and Newsham. Whilst the original passenger line has been built over in a few places, SENRUG has identified the former freight route Blyth Port could be used for this, terminating closer to where the Town centre is today, and with an intermediate station where the trackbed passes Cowpen Road.

- Extension from Woodhorn to Newbiggin by the Sea. This would require re-instatement of quarter of a mile of new track along the former track bed, from a point where the existing working freight route swings north, just east of the A189 Spine Road.

- There is a privately owned working freight line from Ashington running north to the Butterwell works, rejoining the East Coast Main Line at Stobswood. SENRUG believes the route of this line should be protected, so that after freight operations cease at the end of opencast mining, it could be used to connect the northern end of the Ashington Blyth and Tyne line to the East Coast Main Line, creating extra capacity for local services between Newcastle and Alnwick. However, the proposal would require re-instatement of the recently severed link joining the privately owned line to the Network Rail line north of Ashington (fairly straightforward) and the re-alignment of the junction at Stobswood so it joins the East Coast Main Line facing north. This would be more complex given the vertical separation, but could be achieved whilst heavy earth moving equipment is on site as used for the opencast mining operations. 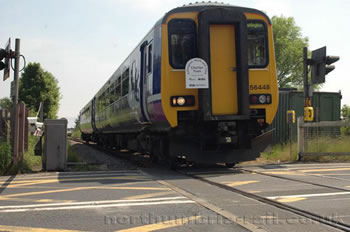